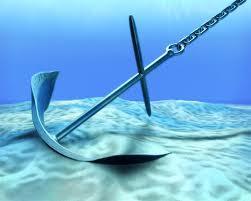 How the anchor works:

We can tell a good anchor when, even if lightweights, it is still able to exert enough resistance to hold up a large vessel. Not only do its flukes sink into the sand and "plant" themselves like stakes, but it also takes on the weight adding sand. The weight of the line also ensures that the anchor keeps its proper position. To give you an idea, one needs to release a length of line at least five times the water's depth.

The anchor line is always kept skimming the bottom of a weight (it could be a second anchor or simply a stretch of heavy chain). It is important to release enough line (or add weight to it if the space is limited) to overcome the wind so that it will not lift up. This way the anchor remains sunken in the sand and doesn’t drag it along.

After having thrown the anchor we haven’t released enough line. The wind, pushing the boat, raises the line from below and lets it loose. The anchor is unable to sink into the sand and our boat will soon go adrift.
The most common mistake is not releasing enough line. The line keeps the anchor in the correct position; A line that is too short or too light guarantees poor anchoring.
We invite you to leave your testimonials,
so you can also help others.